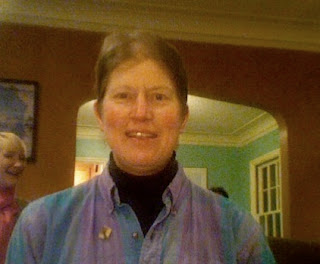 Three things about Mary that have nothing to do with clay.
1. Is a Forester for main income and fights wild fires

3. Tall because she had to out grow three older sisters to avoid hand me downs
Posted by Brenda A. S. Scott at 12:59 PM No comments:

January 27, 2011 – July 09, 2011
Curated by: Garth Johnson
Museum of Contemporary Craft invites artist, writer and educator Garth Johnson to curate an exhibition drawn from the Museum’s collection. As Johnson’s curatorial debut in a museum environment, Era Messages focuses on works from the 1960s to 1980s that exemplify particular moments in the history of craft. As Johnson explains, “This exhibition seeks to examine work that is timely rather than timeless – craft that is evocative of its era rather than existing in the netherworld of timelessness.”
Garth Johnson is an Assistant Professor at the College of the Redwoods in Eureka, CA. He writes about craft, blogs at ExtremeCraft.com and is the author of 1000 Ideas for Creative Reuse. His DVD, ReVision: Recycled Crafts for Earth-Friendly Living, was released by Eyekiss Films in 2009. His artwork was also recently featured in a solo exhibition at the Clay Studio in Philadelphia, PA.
Posted by Anonymous at 12:05 PM No comments: